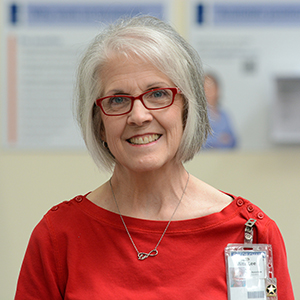 Years ago Mitzi moved from Eastern Washington to the Kitsap Peninsula with nothing but her three younger kids, belongings they could fit in their pillowcases and a box of homeschooling materials. A dedicated mother of seven who for 17 years homeschooled her children, Mitzi had divorced following 31 years of marriage. She had nowhere to live, no income and no clue how to find work. With low self-confidence and over three decades out of the workforce, she felt hopeless. A job is what she needed to become self-sustainable. She connected with Seattle Goodwill and began taking the Retail and Customer Service Program at Bremerton’s Job Training and Education (JTE) Center. Mitzi was offered a job at Bremerton’s Goodwill store, where she has worked the past six years. She refers to the store as her home, due to the strong customer and employee relationships she’s forged. Any opportunity Mitzi gets to share Goodwill’s mission, she takes full advantage. She also always encourages customers to round their change up at the register in order to fuel the mission she’s benefitted from.

“The whole reason Goodwill exists is because of (job) training. I remember not only not having a job, but not knowing how to go about getting a job. That’s a pretty hopeless feeling. They’ll sit down with you elbow-to-elbow and will show you on the computer how to go on there and how to make your resume and how to apply for jobs. That gives you hope.  It’s not help by giving (students) money. Money goes away. It’s help by teaching them how to get a job. You know how tangible that is? You can do it, and Goodwill can help you. I am proud to work here. I like being here, because I help people.” 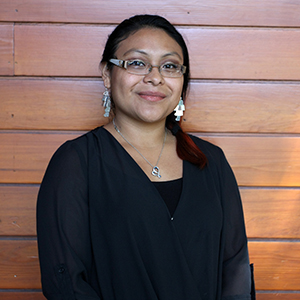 Sucelly endured many hardships growing up in Guatemala. Raised by a single mother, Sucelly’s mom traveled to the United States to create a better life for Sucelly and her sister. At 9 years old, Sucelly and her sister embarked on a dangerous trip in order to join her mother in California. Sucelly’s family didn’t have much, but Sucelly excelled in school and knew education would be her ticket to improving her livelihood. She had to put her dream on hold after starting a family, but last year Sucelly discovered Seattle Goodwill’s South Everett Job Training and Education (JTE) Center, joined its Career Pathways Program and began taking CC 101. She enrolled in Everett Community College, where she’s become active on campus working with international and DACA (Deferred Action for Childhood Arrivals) students. She’s now working toward a degree in Computer Information Systems and takes pride in being a great wife and outstanding example for her 3 year old daughter.

“At first I thought, ‘Goodwill, they offer classes?’ I thought it was just for shopping. We went in to the center, and they are really nice people. I started going to classes and learning things. They just showed me the pathway to start going to college. They showed me what I had to do, where I had to go and they even paid for the test I had to take. They have helped me a lot. When they told me about their classes and said they could help me, I got so excited. I think of my daughter, and I just want to keep on going forward to finish and be like, I did something for my daughter, my family and for my mom to be proud of me. I am just thankful for meeting Goodwill, all the work they are doing and for my family pushing me.” 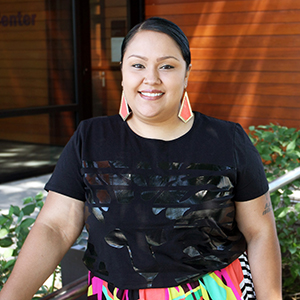 Bianca received her first felony at 18 years old and later received a 15-month prison sentence. Bianca fell into a tumultuous cycle of having no life direction and getting in trouble. The felony convictions discouraged her from attending college, and instead she completed culinary school, which she eventually realized wasn’t her passion. Bianca later started cosmetology school but was unable to finish. She reached a low point when she didn’t have a job, got kicked out of her mom’s house, became homeless and was living out of her car. But Bianca’s life took a positive turn when a friend told her about Goodwill and its programs dedicated to helping people with criminal records find work. She was accepted into Goodwill’s Retail and Customer Service Program, and Bianca thrived. She landed a job in Goodwill’s E-commerce Department and developed a passion for helping others, especially those who’ve dealt with some of the same barriers she’s had to overcome. Bianca’s work ethic and persistence earned her a job in Goodwill’s Job Training and Education Department as the Warehouse Logistics Training Program Instructor. The job is particularly gratifying for Bianca, because the program largely works with people who have criminal backgrounds and are struggling to find work.

“It didn’t really register what a great thing Goodwill is doing for people until I became an employee and really started to learn about all the job training and education. I just got really inspired during that time. When I heard about the (Retail and Customer Service) program, I thought this is my second chance. Before, I went to school and tried these other things, but they weren’t set up to support me the way Goodwill has. Some of us have messed up our lives so much that we need a specific program that is really going to support. I have learned so many skills. My vocabulary has grown. My professionalism has grown. It’s just the whole entire Goodwill is support for me. It’s good to know there are organizations out there like this.” 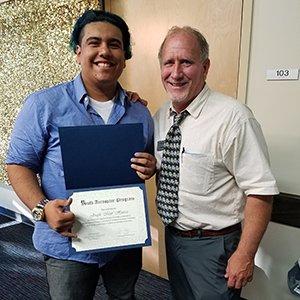 Matthew was simply looking for a summer job when a teacher at Everett High School told him about Seattle Goodwill’s Youth Aerospace Program. He quickly learned the program wasn’t a summer job, but rather it was a two-year commitment where he would develop strong soft skills and connect with future career opportunities in the aerospace/advanced manufacturing industry. Although Matthew’s first passion is creating music, he pursued the program because of all the important life skills he knew he’d develop. He has improved his public-speaking skills, has learned to be open and connect with people who are different than him and has received a strong view of what a career in the aerospace industry would look like. Matthew recently graduated from high school and has forged a bond with the program, instructors and other students in the program’s cohort. He’s enrolled at Everett Community College and will begin taking classes soon.

“The first time they had a little orientation, they started talking about all the things we would be going over and told us they’d be teaching us how to do more public speaking and learning how to build a resume and volunteering. That really started to pique my interest. I’ve grown as a person, and I have learned to be on time and if I want something I need to go get it instead of waiting for it to be handed to me. Learning to come together as a group was a huge barrier that the program has helped me overcome. I have learned how to communicate and have a good work relationship.”

Andrew is a Content Specialist for Seattle Goodwill and has a wealth of writing, communication and digital media experience. He loves all things sports related and owns a treasure trove of memorabilia. He also enjoys storytelling, the outdoors and sugar is his kryptonite.