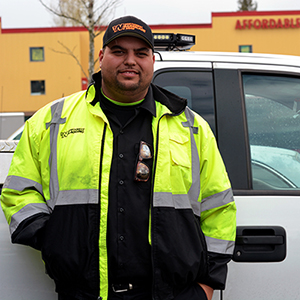 Just over six years ago Keone was admitted to the Monroe Correctional Facility after being charged with a series of residential burglaries. He was hooked on drugs, had alienated the people he cared about and lost his friends, family and eventually himself. But two years into serving a 5 ½ year prison term, he began turning his life around. Keone earned his GED, took nearly every program the prison offered and found solace in working at the facility’s wastewater lagoon. He studied wastewater for over 3 years and led a class in which he taught 30-40 inmates every six months. Keone even got certified through the Washington State Department of Ecology. Months before his release, Keone took Goodwill’s New Connections class, which prepares inmates for a successful transition into the job market. Soon after Keone’s sentence ended, his fiancé’s father offered him a sales manager position at his sign and barricade equipment rental company. He has been excelling and working long hours to give back to the man who afforded him a second chance. Recently, Keone hosted a hiring event at Goodwill’s South Everett Job Training and Education Center, proudly stating he wanted to give people a shot who’ve also faced barriers in their lives.

“What got me in was I was a drug addict doing all the things that come with drug addicts—robbing, stealing, doing underhanded stuff. I wasn’t always like that. I just got hooked on drugs and everything else went with it. My plan was originally to do the class thing in there, do my resume and never see Goodwill again. But then I started going to class, and (Goodwill) had some other principles that I liked. I started thinking harder about my future. The Goodwill program helped because it gave me another perspective to look at. I want to give somebody a shot that nobody else will give a shot to. So I feel like if I’m in the position to give somebody a shot that somebody gave me, I feel like it’s my duty.” 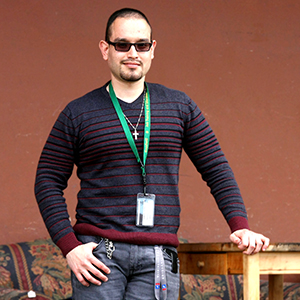 Originally from Mexico, Gonzalo moved from California to Washington in 2011 and began taking classes at Goodwill’s Marysville Job Training and Education Center. He wanted to develop necessary skills in order to land a job. Gonzalo took English for Speakers of Other Languages (ESOL) classes and soon was asked if he wanted to volunteer at the center. More than six years later Gonzalo has registered over 1,500 volunteer hours, working as a teacher’s aide and acting as an interpreter and translator for Spanish-speaking students. He volunteers every Monday through Thursday for three hours. Not only can Gonzalo connect with Hispanic students through conversation and culture, several years ago he earned his U.S. citizenship and serves as a testament to other students that gaining citizenship is achievable. Gonzalo hopes all the experience he’s gaining will lead to a job as a translator, and he loves the rewarding feeling of helping others build skills that will set them up for better economic opportunity.

“I enjoy helping my Hispanic community, but also I do something that helps me find the job that I want, which is translating. That is why I keep coming here. I love helping, especially after I help them and they say ‘thank you.’ That is what motivates me. It’s been a great time. I encourage other people to volunteer. I encourage you to come to Goodwill, and that can help you get the job that you want. I can show that volunteering is good. It is a good experience if you want training to get a job. Since I have been (volunteering) here for almost seven years I have met a lot of people and have had a lot of friends here at Goodwill.” 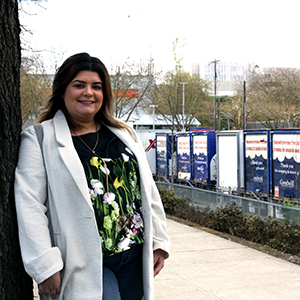 Sahily was exposed to fashion and design at an early age. Her grandmothers were both seamstresses, and she fondly remembers using sewing machines to make clothing for her dolls. Sahily, who grew up in south Florida, earned a communications degree with the hope of working in fashion PR. Along the way she created Pretty in Pigment, a fashion blog showcasing Sahily’s style, tips and personal journey as a plus-sized woman in the fashion world. Sahily hopes her blog empowers readers and gives them confidence to be defined by who they are and what they like to do, rather than their figure. She dealt with body issues growing up, but through her blog has gained self-confidence and hopes to share her message of body acceptance with fellow plus-size women. Recently Sahily has discovered a passion for thrifting and is a frequent Seattle Goodwill shopper. Goodwill offers a diverse selection of women’s clothing, in size and style, most retailers don’t, and Sahily loves making those hidden-treasure finds, or “unicorns,” as she put it.

“Not all stores carry plus-sized items, and if they do it’s an extra-large, and even that isn’t really covering a large enough scope of plus-size women. Goodwill has dedicated sections for plus sizes and not just a couple of items, but lots of times there is a full-blown rack. It’s nice because women are given the option to buy those things, and the price point is very reasonable. For me, in terms of my body, I’ve fluctuated in weight. I’ve had skinnier times. I’ve had bigger times. I learned through that process, especially as a kid growing up, that it can be hard when you are the bigger kid, and there were times where I felt uncomfortable with that. But through blogging, and particularly fashion blogging, it’s helped me kind of gain more confidence in myself, and kind of find that I am more than just a size or a certain body type. Goodwill has really given me an opportunity to explore my passion for thrifting deeper.” 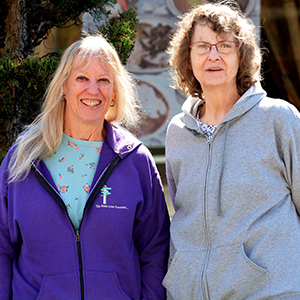 Loanne was looking to gain computer skills, Cathie was teaching computer classes and now the pair are making a critical impact at Seattle Goodwill’s Bellingham Job Training and Education Center. After retiring from the Navy, Loanne wanted to volunteer but discovered she didn’t have the computer skills needed for many volunteer positions. She enrolled in Goodwill’s Computer Explorations class, and Loanne was then asked to stay on as a volunteer. That’s where she met her Goodwill instructor Cathie, who was also teaching computer courses at Bellingham Technical College. The duo has registered a combined 500-plus volunteer hours, helping students increase their digital literacy, opening new lines of communication and helping students increase their job readiness.

“I tell people the biggest thing we teach here is confidence. Some (students) who start don’t even know how to turn the computer on without help, and then a lot of them get stuck. They are feeling too dependent on other people, and this empowers them.”

“It just brings (the students) to that world where everyone else already is. They get more confident every class, and the pretty soon they are showing us how they can do stuff. And they are so happy about it.”