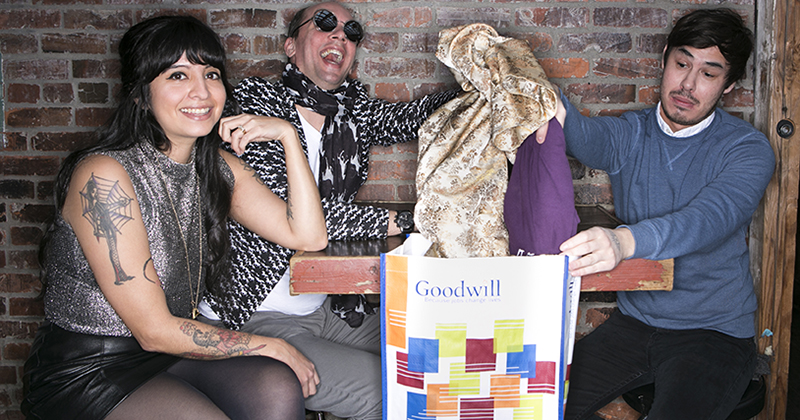 Where: Tractor Tavern in Ballard

Every time a donation is made to one of Seattle Goodwill’s 40 donation sites, not only does that benefit our Job Training and Education programs, it also supports our environment by keeping materials out of landfills.

The bands will play break-up cover songs in conjunction with Seattle Goodwill’s #breakup4good campaign, in which we are encouraging people to break up with unneeded items and donate. The concert starts at 8 pm. Thursday, April 20, at Tractor Tavern in Ballard. Doors open at 7 pm. General admission tickets costs $15 and can be purchased here.

“We are excited to play this show, because it’s our first show of 2017 and we love Goodwill and KEXP and Tractor,” said Leeni Ramadan, Prom Queen guitarist and lead vocalist. “Plus the bands are amazing, and I love the theme of the evening. I am excited to perform our selection of breakup songs!”

Leeni and her band members regularly support Goodwill’s mission, and now they have the opportunity to promote the message of sustainability.

“Thrifting has been a way of life for me for as long as I can remember,” Leeni said. “And my bandmates love it, too! Whenever we travel, we are always thrifting in each city if we have time. I shop at Goodwill on a regular basis, and some of my favorite things I own are from there.”

“The Break Up for Good event provides another way to promote local music, which is really fun and important,” Sharlese said. “Not only is Goodwill a retail shop, it uses its funds to help people find jobs and get education and get into the work force. I think that is really special.”

Here is a quick breakdown of the five bands performing at Sustainable Sounds:

Prom Queen, best described as a dark surf rock, girl-group noir sound, went from a solo project to a band after her debut album Night Sound in 2012. Prom Queen’s live show is described as moody and electrifying, and it showcases each of the band members’ skill.

Cataldo, an indie pop band, is led by creator and front man Eric Anderson, who grew up in Moscow, Idaho and moved to Seattle after college. Cataldo’s shows have evolved through the years to not only entertain musically but visually as well. Cataldo’s newest project, Keepers, is slated to be released April 28, 2017.

Goodbye Heart, a dream pop duo, is composed of friends Sam Ford and Nila K Leigh, who began collaborating in New York City before moving to Seattle. Their sound is made up of atmospheric synths, electronic percussion and heart-wrenching vocals. Their musical influences range from The Cure to Johnny Jewel to Nas.

Acapulco Lips, a psychedelic trio, formed in a Seattle basement and were brought together by the love of reverb-laden R&B and psychedelic rock. Their unique sound is a blend of 1990s Seattle garage music and a 1960s eternal summer sound.

Star Anna is a singer and songwriter from Ellensburg who blends country sound with emotional and honest rock and roll. She has a unique voice that Seattle Times columnist Nicole Brodeur described as: “a voice full of bluster that will slam the door behind you, then find itself alone to take in the loneliness, the quiet, the beauty.”

Besides joining Seattle Goodwill and KEXP for our Sustainable Sounds concert, be sure to follow our social channels for daily prize giveaways. Each giveaway will start at 8 am and close the following day at 8 am. Grand Prizes include Lady Gaga tickets, a Sounders FC package and a Seattle Repertory Theater night out, which includes a $250 gift card to the Seattle Repertory Theatre and a $50 gift card to Local 360.