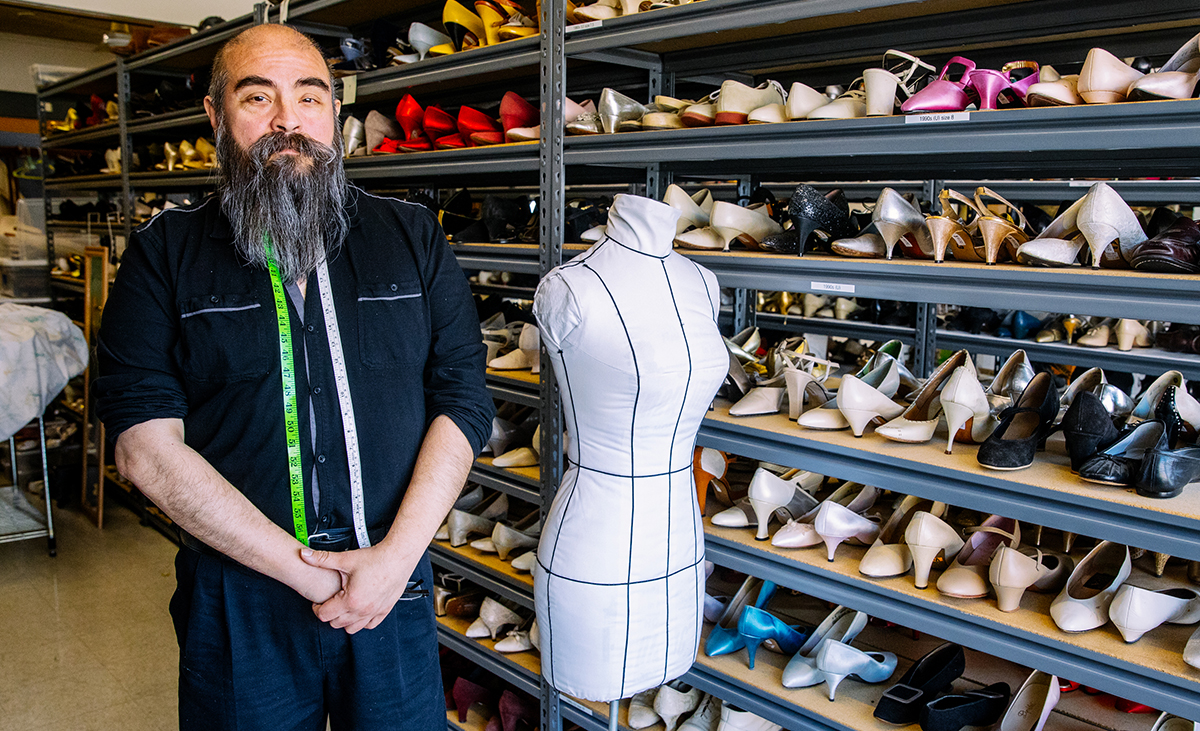 When hundreds of guests, bedazzled in glitter and dressed to the nines, pack the Bell Harbor International Conference Center on October 20 for Seattle Goodwill’s annual Glitter Gala, eyes will be fixated to the runway for the Gala’s most stylish event — the Glitter Gala Fashion Show.

Somewhere backstage, sequestered from all the attention, fashion designer Mark Sanchez will be hustling around making last-second adjustments, overseeing his production and making sure he’s primed Goodwill’s volunteer models for runway success.

Fashion designer loosely defines Mark. The past five years he’s overseen in various capacities the Glitter Gala Fashion show. He’s also an instructor at Seattle’s Cornish College of the Arts, who got his start as a costume designer. He worked for a decade designing and touring with national opera companies and has now worked in the industry the past 33 years.

To think, Mark growing up envisioned himself as a chef.

“Fashion was something I never really expected to be a part of,” Mark said. “I worked in a restaurant, saw what the day-to-day was and thought, ‘Oh, no, this isn’t for me.”

To understand how Mark entered the fashion world, a venture to his youth is required — when Mark and his two brothers were imparted many lessons by his grandmother. Mostly, he was taught to take care of himself. That meant cooking, cleaning and, yes — sewing.

“Anytime that we had crafts in school, it was great. We were given yarn and a gunny sack, and I made my own backpack and embroidered a turtle on it. To this day, I sort of look at it and say, ‘That is a good turtle.’” - Mark

Mark’s first memory of using his grandmother’s sewing machine was at age 6. To him, though, what he was doing was nothing special. It wasn’t until later in life he realized not every child grew up sewing for hours on end.

When asked the first time Mark remembered he’s sewing skills were advanced for his age, the idea crystalized in his mind before he produced a comical grade school anecdote.

“Anytime that we had crafts in school, it was great,” Mark recalled. “We were given yarn and a gunny sack, and I made my own backpack and embroidered a turtle on it. To this day, I sort of look at it and say, ‘That is a good turtle.’”

Mark estimated he was 8 or 9 at the time. While Mark’s project put others’ tape balls and stick creations to shame, the care he put into the elementary-school project is emblematic of the attention to detail and effort he’s always put into his creative.

“That was just my instinct and how I was and that is what just comes out,” Mark said. “I sort of think that about every project. I need to give it life, otherwise it is not special enough. I give it that tweak. I think, ‘This is what it needs in order for it to come to life so to speak.’”

Mark has styled his share of fashion shows, but the Gala is different than most. He’s looking forward to the months-long build-up coming together to form one memorable show on the third Saturday in October.

“With this show, particularly, I don’t have a line of clothes that I’m repping,” Mark said, “I have people that I am representing. I sort of use my theatrical experience in that I kind of give them characters. It’s kind of a different persona they can inhabit for that evening.

Below is sneak-peak of the segments Mark has planned for the 2018 Glitter Gala Fashion Show — themed Runway to the Future.

You know those people whose clothing catches your eye walking down the street and completely own their look no matter how eccentric? Mark hopes to deliver some eye-grabbing looks during this section.

Fourth section: Devil in the details

This section is all about embellishments — the added details that make pieces pop. That includes unique embroidery, fringe, feathers, ribbons, studs — any extra detail that elevates a clothing item.

Fifth section: Glamour in the city

Red carpet meets Met Gala is an accurate summation of this section. Throw in some sparkle, beading, strong silhouettes and statement-piece jewelry, and the only thing missing will be paparazzi in tow.

Final section: Into the future

Mark described this section as Couture meets Mad Max. This section will be heavy on metallics, so expect the extravagant and avant-garde as the fashion show concludes with some stunning looks.

Learn more about this year’s Gala and the how it supports Goodwill’s mission to providing free Job Training and Education programs to those in need.