Posted in: Contests & Giveaways and Halloween 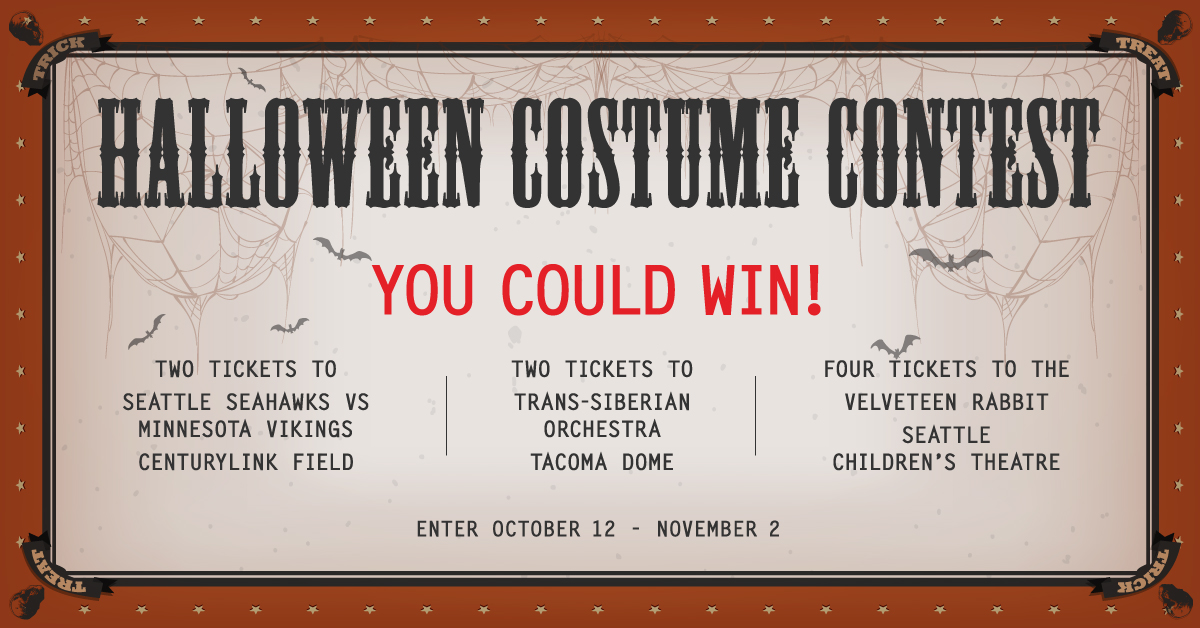 We LOVE Halloween at Goodwill. One of the ways we celebrate is with some serious prizes including, two weeks of daily giveaways on our Facebook page, our Who Wore it Best Dog Costume contest our Costume Contest!

Here are all the details you need to win some sweet prizes this #GoodwillHLWN season:

This year our annual Costume Contest runs October 12 – November 2. Enter your DIY Costume by 11:59pm on November 2 for a chance at one of three awesome prizes including two tickets to a Seahawks game, a pair of tickets to see Trans-Siberian Orchestra at Tacoma Dome, or a set of four tickets to see The Velveteen Rabbit at Seattle Children’s Theatre.

Who Wore it BestDog Costume contest features a handful of adorable dogs wearing costumes found at Seattle Goodwill stores. From new dog costumes to used and DIY costumes sourced at Goodwill, you can find the perfect costume for you and your canine companion. Vote on what dog you think wore their costume best, and you could help them win a fun dog package courtesy of Mud Bay just for voting. Dogs include local dogs and adoptable dogs from Seattle Humane.

We love local business at Seattle Goodwill (because we are one!) and we love to celebrate Halloween with our neighboring businesses. This year, we have two weeks of daily giveaways (M-F) featuring prizes donated by many local businesses. Each weekday, the giveaway will launch at 7:30am, and entry will be open until the next daily contest launches.Daily fiveaways run from October 16th - 29th.

Check back soon for the daily giveaway items!

*Some prizes must be picked up at the Seattle Goodwill Administration Building.

Submit a photo of your 2018 DIY Halloween costume between October 12th through November 2nd, and you are entered to win one of three grand prizes:

Click here for the full costume contest and daily giveaways rules and regulations.