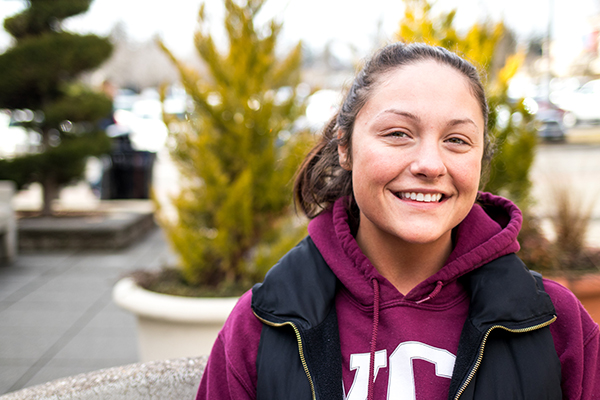 Seattle Goodwill’s Bellingham store has provided Haley-Jo with the supportive and caring work environment she desired since returning home from Spokane a year-and-a-half ago. Haley-Jo left the area and headed east to get clean from drugs and alcohol. She was homeless before she left and needed a life change. After getting clean, Haley-Jo returned to Whatcom County and was looking for work. She applied to Goodwill and was hired her second day back. She works as a Production Associate, focusing on textiles, and with the schedule flexibility Goodwill managers afford her, Haley-Jo is attending Whatcom Community College to become a chemical dependency professional. She also works part-time with Pioneer Human Services in Bellingham.

“Goodwill has been absolutely amazing working with me and my school schedule and just supporting me. I tell everybody, I’ve never had managers take care of me like they do here. It’s like a family here. They understand each person is from a different background and might have different life difficulties, and they really strive to help you and just do everything they can. Coming back here and re-starting my live over here was kind of rough, and everybody has been so supportive of me.” -Haley-Jo

Lisa had been volunteering as an office assistant at Goodwill’s Skagit County Job Training and Education (JTE) Center for a year before she left to address health problems. Nine months later, Lisa returned to Goodwill, but instead of providing volunteer service, she began receiving help. Lisa had been losing important numeracy skills from past head trauma. She couldn’t give the correct amount of change to a cashier. Lisa struggled remembering her phone number and address, too. She confided in Skagit County JTE staff and began taking Goodwill’s High School Equivalency (HSE) course, which traditionally paves paths for students to earn their high school degree of High School 21+ (HS21+) diploma. Lisa raved about the individualized instruction she received in the math portion of the course. Her instructor connected with her in a unique way, and Lisa’s numeracy skills slowly returned. Lisa, who was out of work, now feels confident she can soon return to the workforce.

“What Goodwill has done has made a huge difference to me. I also want to express how grateful I am that the people at the Skagit County Goodwill JTE Center were willing to take me on as a student even though I wasn't the usual HSE candidate. Every two weeks there has been something new I have been able to do. This year, I did my taxes by myself, which was the first time in three years. Knowing someone is going to be there for me who I can ask help from was very helpful for me. Meeting my objectives has made me realize something important — things that previously seemed insurmountable now seem possible.”  - Lisa

Stephanie always dreamed of a life as an early childhood educator. But years went by, barriers mounted and her career goals faded. She moved to the U.S. at 16 without any English-speaking ability. Stephanie left high school before graduating, and the birth of three daughters caused Stephanie to further place her life aspirations on hold. In 2016, with the help of Goodwill, Stephanie discovered renewed hope. She took an English for Speakers of Other Languages (ESOL) class hosted by Goodwill at the Casino Road Academy in Everett. Her instructor opened Stephanie’s eyes to the possibility of college, and the two crafted a plan together of how Stephanie could accomplish her career goal. Stephanie outgrew the ESOL course, enrolled in Goodwill’s High School 21+ program, where Stephanie earned her high school degree, and with the help of Goodwill she enrolled in classes at Everett Community College. Stephanie received tuition help, financial assistance with books and has received other supports services so she could focus on her studies.

“I didn’t know all this was possible. Once I started studying high school-level classes, I realized it wasn’t as hard as I thought it would be. Everything kind of opened up, all these possibilities were endless. (My Goodwill instructor) became my mentor, not just a teacher. He was so encouraging, so helpful. He talked to me about the classes Goodwill offered and said because I was one of his students, I could qualify for help, and they could pay for my classes. It was so amazing.” - Stephanie

Daniel is determined to take advantage of what he’s described as his “second chance.” After leaving the Army in the late 1980s, drugs and alcohol took over Daniel’s life. For around 20 years, Daniel struggled to hold a job and was often homeless. Daniel routinely got sober only to relapse after 30, 60 or 90 days. In 2010, a treatment plan stuck after Daniel suffered a health scare, and he has been sober for eight years. Daniel wasn’t best suited for the fast-paced food service jobs he’d had in the past, and his limited education prevented him from landing the job he desired. That changed when he registered for a Goodwill class December of 2015. Daniel took all the computer courses offered at Goodwill’s King County Job Training and Education (JTE) Center. He took a writing course and then began volunteering in Goodwill classrooms. Recently, Daniel landed a job at as a Computer Lab Assistant in Goodwill’s WorkSource center. He now helps crafts resumes for community members, connects people to job resources and takes great satisfaction in positively impacting his community.

“Goodwill’s saying is jobs change lives, but I think in my case it was Goodwill saved my life. I was headed to nowhere. The main thing I enjoy is the diversity. That’s the most attractive thing. Going in (to Goodwill) is something to do with my time that is constructive, and I am always learning something whether I am in class or not. It’s been really good for me to turn my life around and try new things. I feel like I’ve been given a miracle, kind of a second chance, and so I want to take it and go with it.” – Daniel