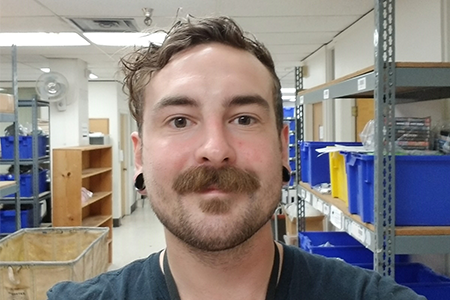 For the last eight years, Pete’s work has helped Seattle Goodwill provide free job training, education programs and support services to community members in need. His work in E-Commerce allows Goodwill to continue its critical mission of helping others improve their lives and the lives of their families.

While Pete has learned the importance of Goodwill’s programs, he’s never needed to take advantage of them himself. That changed when Pete, like so many others, became unemployed due to business closure brought on by COVID-19.

“After the Stay-at-Home Order in late March, I didn’t work for the next six weeks,” Pete explained. “I was slowly losing my mind in that capacity. It’s kind of tough not having any income and not knowing when I would start working again or thinking if I am going to have a job when we come back.”

Before Washington State Governor Jay Inslee announced his Stay-at-Home-Order, Seattle Goodwill closed all its thrift stores to support public health efforts. A week later, when the order was put in place, Goodwill closed its remaining operations on March 25 and was forced to temporarily place most of its employees on stand-by status.

Still, even though many employees were out of work, Goodwill’s mission didn’t stop.

“For weeks and weeks, I was trying to file for unemployment,” said Pete, whose $1,200 stimulus check quickly went to pay past due bills. “Finally, after two weeks of calling hundreds of times a day, I was able to solve that problem, but then a new issue arose. I kept getting denied.”

Frustrated and stressed by dead-ends and mounting financial strain, Pete reached out to Goodwill for help through a Facebook support group that had been set up for employees.

“They ended up fixing all my problems almost overnight,” Pete said. “Goodwill was going through employees case-by-case on the phone for hours with the (Employment Security Department). Overnight I got a notification that everything went through, and I got full back pay for the six weeks that my claims were denied.”

Pete said he left a voicemail with Goodwill’s Job Training and Education team on a Monday and got a call back an hour later. On Tuesday, Goodwill’s JTE team cleared up Pete’s case with DHS, the claim was approved Wednesday and by Thursday morning Pete had money in his account.

The payment came just in time. While Pete had some savings, he was beginning to worry how long he could get by without working and without unemployment support. Living in North Seattle and among his circle of friends, he’s seen the devastation caused by the economic downturn.

“I’ve watched how the JTE programs have worked, and I’ve had several really good friends who moved here from Africa or Southeast Asia who went through a Goodwill program and now they are in management positions,” Pete said. “Watching that whole progression, it’s incredible. I’ve always believed in the mission, but this whole situation has really opened my eyes to what JTE and Goodwill can do for our employees and not just anybody in our community.”

Recently, Pete returned to work as Seattle Goodwill ramps up efforts to get back online. While many answers regarding COVID-19 and its health and economic impact remain, Pete is happy to get back to work with an extra sense of gratitude for his employer and appreciation for the work that he does and the impact it makes.